Building the Church: A Brief History 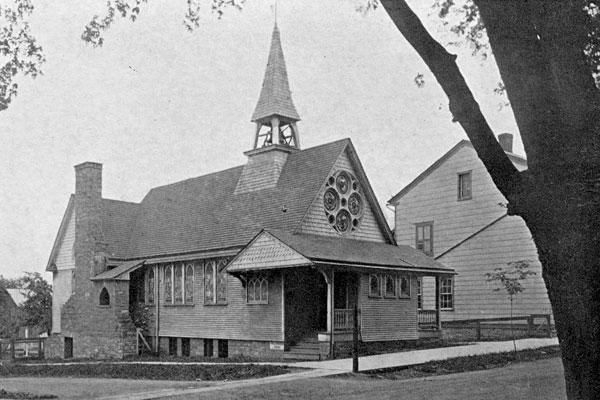 All Saints has stood at the corner of North Market and East Snyder Streets in Selinsgrove for over a full century. What stories this silent, abiding sentinel could tell as the years have passed since that August day in 1899 when the foundations were prepared and the building began to take shape. Here, the floodlit tower serves as a beacon in the night hours. The Celtic cross surmounting the tower proclaims the Lord of Life whose spirit and presence grace the entire fabric. That all-embracing Spirit of the Redeemer has equipped the saints for ministry and growth; still, it equips the saints of today forgrowth into a new millennium.

Mary Kittera Snyder, under God, Foundress of this church, made a lasting gift to the village named for her great uncle, Major Anthony Selins who was famous for his heroism in the American Revolution. The church also stands as tribute to Miss Snyder’s grandfather Simon Snyder, first governor of German descent to serve Pennsylvania. Governor Snyder served from 1808 to 1817: upon retirement, he lived in the Snyder Mansion near the future location of All Saints until his death in 1819.

All Saints was built with a cruciform architectural plan. The interior recalls the ancient manner of dividing the church into three distinct parts. The nave reminds us of the Church Militant; the chancel recalls the Church Expectant; the sanctuary brings to mind the Church Triumphant. The windows are likewise rich in symbolism. Above the High Altar is a gothic arch containing some glorious stained glass. Here appears the symbols “Alpha” and “Omega”, reminiscent of our Lord’s own words, “I am the Alpha and Omega, the first and last, the beginning and the end.”

Also depicted is the Cross surmounted by the Crown and palm branches, summarizing the records of saintly victory. The great rose window in the west end of the church contains four large lozenges, or circular panels with a dominant flower motif. These floral panes can be taken to symbolize Our Lady and serve to remind us that it is our vocation to touch all things that they may blossom and flower to the glory of God. It is intended the Divine Worship, by which is meant the Holy Eucharist will have put us in mind, heart and spirit to carry out our vocation in the expression of the Baptismal Covenant.

The windows in the narthex, nave and chancel contain no definite figures; their symbolism is in their colors. The deep turquoise and amethyst hues at the edges gradually blend into brighter shades of gold. The colors remind us that the night is past and God has brought us out of darkness into the light of the all-embracing love of his dear Son.

The ‘Governor’ still speaks. Possibly the only working church bell in Selinsgrove Borough, the great bell still rings to announce all services at All Saints. Several inscriptions cast into the bell tells it’s story. On the yoke holding the bell in place are cast these words: “Meneenly Co., Troy, N.Y.” On the bell’s west side appears, “Meneely Bell Company, Troy, N.Y., A.D. 1899.” On the west side of the bell is it’s identification: “Simon Snyder, Born at Lancaster, Nov. 1759, died at Selinsgrove, Nov. 9. 1819. Governor of the Commonwealth of Pennsylvania, 1809 – 1817.”

All Saints was finally consecrated on November 3rd, 1908 by the first Bishop of Harrisburg, Rt. Rev’d. James Henry Darlington. It continued under the care of the Diocese as an organized mission until 1937, when it was admitted to the Diocese as an incorporated mission. It retained mission status until June 1987, when the church became a fully incorporated parish in the Diocese of Central Pennsylvania.